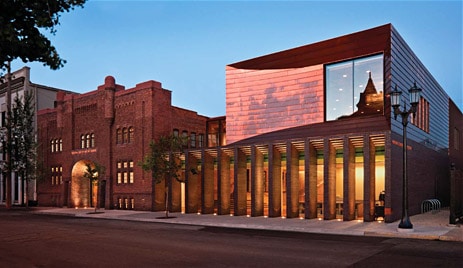 We are hosting our 2nd Annual Appreciation Event to say “Thank you” to all the volunteers who helped in any way! In addition, we will be recognizing 3 Prevention Champions in the community who made a significant impact to reduce and prevent teen substance abuse through their volunteerism and influence in Winona County! ASAP will also be releasing its 2017 Annual Report and highlighting ways you can help make a difference. The event is being sponsored by Minnesota Adult & Teen Challenge, and is open and free to the public. Light appetizers and refreshments will be provided. Please come to join in the celebration and learn more!

PLEASE REGISTER TO HELP US PLAN FOOD AND DRINK ACCORDINGLY.

Hidden in Plain Sight (HIPS) is a free exhibit we offer to parents and guardians to learn about the warning signs of experimental and regular substance use. Adults are only allowed to walk through this mock teen bedroom with a checklist to try and identify more than 20 household items that may indicate substance use.

The next opportunity to view this exhibit will take place at the Way to Wellness Expo. You can view and print the flyer below.

To request a showing of the exhibit with your group or organization, please email [email protected] or call 507-474-2727. 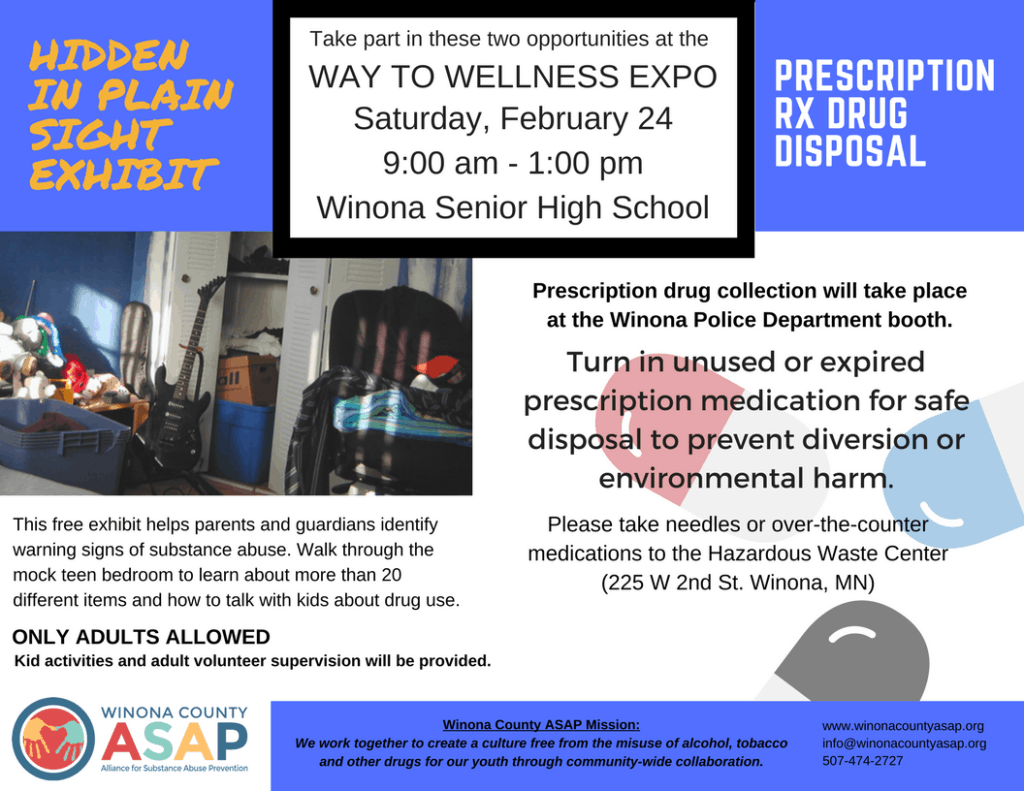 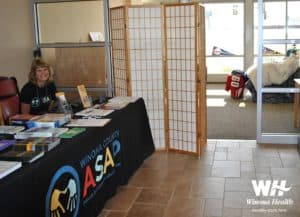 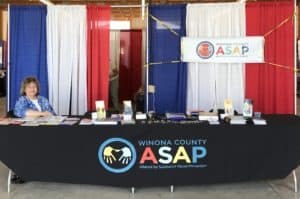 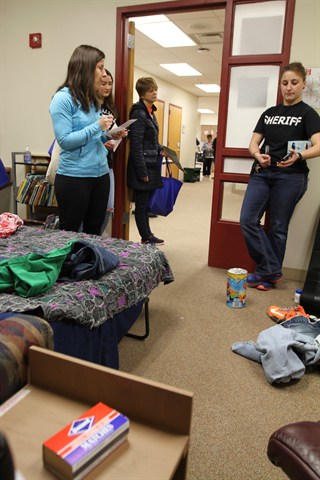 July 12-16, 2017: Read about our time at the Winona County Fair in this Winona Daily News article.

February 28, 2017: Read this Winona Post article to learn more about the event at the “Way to Wellness” Expo. 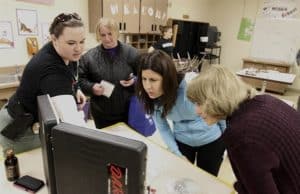 Our coalition has been doing great things over the last 2 years, and you can get a taste of what prevention looks like in this Winona Post feature article. Several coalition members were interviewed to describe the work they were involved with. CREDIT: Chris Rogers

Please contact the Program Coordinator to learn more or get involved:

How many students do you think use marijuana frequently (Once a week or daily)?

Watch the 3-minute video (below) to find out. 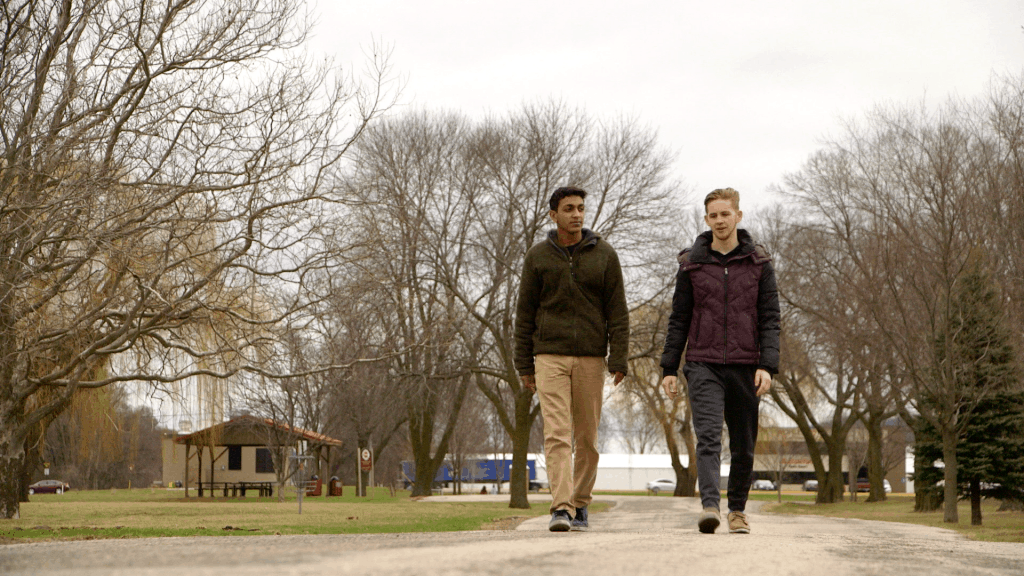 In 2017, we launched a campaign with students to show their peers and the community that most of them do not use marijuana. Students produced a professional short film and ad that was broadcasted at the local movie theater and on social media. They also created billboard messaging for local marquees and laptop stickers for student computers. 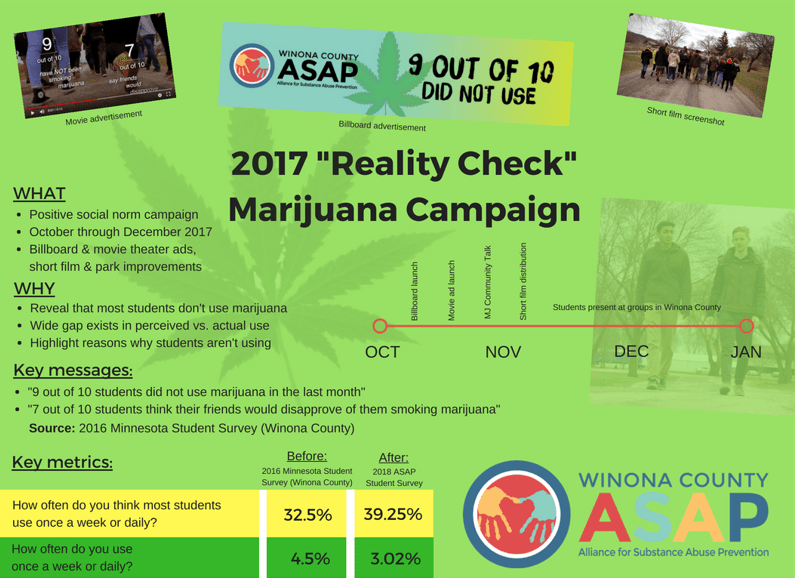 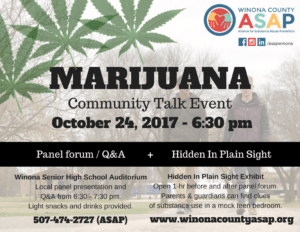 Last Tuesday (October 24) volunteers hosted a Community Talk event on marijuana in the Winona Senior High School Auditorium. 40 individuals attended to hear from a panel of local experts on what they observe around marijuana in Winona County and how they view legalization of recreational marijuana impacting their field.

The panel consisted of:

A student from Winona Senior High School who attended the event wrote a brief report of the event, included below.

On Tuesday, October 24th, there was a meeting ASAP put on that specifically talked about marijuana use in Winona. I learned a lot from that meeting. I found out that marijuana use is not the norm for students at Winona Senior High and regular use of marijuana has many negative effects to a person’s life.

Students at WSHS seem to think that most people try using marijuana at some point during high school. This is completely untrue. In fact, a survey was done of students at WSHS and 9 out of 10 said they had never used marijuana. Another 7 in 10 went on to say that their friends would disapprove of them using marijuana.

Marijuana has many different negative effects on student’s lives. On average, students who use marijuana get lower grades, are less likely to graduate high school, and are less likely to go to college than students who do not use marijuana. It is hard for students and adults to get jobs if they are marijuana users because many employers require drug tests. Marijuana use can cause permanent structural damage to teenagers’ brains, which might provide an explanation to the link between schizophrenia and marijuana use.

Going to this meeting taught me a lot about marijuana use and the prevalence of it. It further affirmed my decision to not use marijuana and taught me that most people will approve of this decision.

You can contact the Program Coordinator with any questions or comments by emailing [email protected] or calling 507-474-2727.